The History of Polo 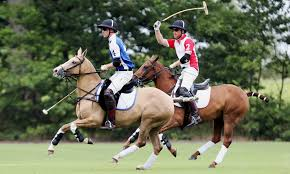 Polo is a sport that is linked very much to our royal family with Prince Charles, Prince William and Prince Harry all taking part in the sport at one point or another. It is a sport that has its roots deep in history and it continues to still have an influence on aspects of our lives today. For example, did you know that the Farah Polo Shirt was influenced by the polo shirts worn by the players?

The game is thought to have originated in Central Asian and was first played in Persian (which we now know as Iran) from around the 6th Century BC. It was originally cavalry groups that practiced the sport and the kings;s guard. It was seen as a fun way for them to enhance their riding skills, whilst getting much needed exercise and having some fun along the side.

Polo spread across the continent and was taken up in Indian where British cavalry units first came across the sport. Matches were held between the Indian and British troops in as early as 1866. The British brought the game back to the United Kingdom and it has been played ever since after gaining noble and royal support.