The impressive career of Jonnie Peacock

Jonnie Peacock is a name that anyone who loves sports will probably have heard of. He is one of the UK’s gold medal paralympians. Between 2012 and 2014, he won the Paralympic, world and European titles in the sprint category, and at Rio 2016, he successfully defended his Paralympic title. 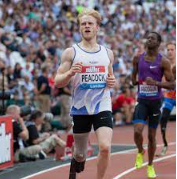 Having been born in Cambridge in 1993, he had his right leg amputated below the knee at the age of five as a result of contracting meningitis. He spent time recovering and learning to walk again with the use of a prosthetic. People who are in similar situations will often use Mobility Aids like the ones from https://www.abilitysuperstore.com to help them adjust to a new way of walking.

He was motivated to attend a talent identification program run by the British Paralympic Association in the weeks following the Beijing Paralympics, and within a short time he was competing in major events, finishing fifth over 100m in a major championship. He took up para-athletics at the age of 16. This then led him to take up full time training as an athlete.  It was in 2012 in Great Britain that he took home the gold medal in the olympics. He was also crowned the  world’s fastest amputee sprinter when he ran 100m in just 10.85 seconds.