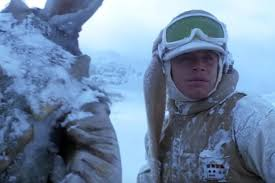 When you are on the run from a vicious and uncompromising Evil Galactic Empire you need some real out of the way backwater to hideout in. This is especially true when you remember that it was only a few years back that you blew up their really expensive Planet destroying battle station. The Empire, it seems, is looking to strike back. So where better to hide than some permanent frozen lump of rock in the armpit of the Galaxy. I give you the Planet Hoth.

It must have been a bit of no brainer for the Rebel Alliance hideout selection committee. Hoth is a world totally covered in snow and ice (we shall ignore the fact that as it has no trees it probably doesn’t have an atmosphere and therefore no oxygen). It would take a Land Remediation Services several lifetimes to sort it all out.

This cold rock would be the last place the Empire would look for a bunch of rebels. Not to be outdone the Empire sends out loads of Probe droids on the off chance they’ll get the right one. As lifeless rock’s go Hoth is quite inhabited. Despite Luke’s sensor telling him the opposite, he gets one to the face from a clearly living yeti like Wompa that fancies him and his Taun-Taun for lunch.